I finished a trilogy that I adore … come sob with me! (Review)

I’m not sure how many of you this, but I love the Out of Time trilogy by Nadine Brandes. And GUESS WHAT??!!! I’m obsessed with CAPS LOCK right now!!!

TODAY THE LAST BOOK IN THE OUT OF TIME TRILOGY RELEASED. (Told ya I was obsessed.) I got the awesome chance to be apart of the tour! And since today is the release day … today is the last day of the tour. I knew that I wanted to post on the last day, but I didn’t know that I’d be rushing TO FINISH THE BOOK WITH AN HOUR ‘TIL I WAS A DAY OVER. But, yes. I don’t look at dates often. Oops.

(There’s also a BIG FACEBOOK PARTY going on soon … so here’s the link!)

A Time to Die

A Time to Speak 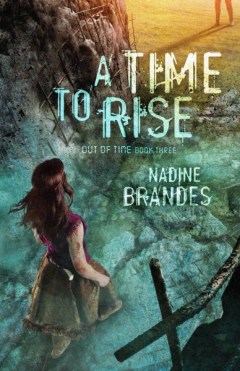 A Time to Rise

Guys, I legitely finished this just now. Like, I closed the Kindle app on my phone and sat down at my computer.

Oh, how to put it into words!

And, may I say, Nadine is one of those authors who’s not afraid of killing characters (people … and animals) and BREAKING YOUR LITTLE NINJA HEART. But yet … this trilogy

has DEFINITELY marked Nadine as a favorite author of mine, and I’m sooooo excited for more of her books! (Like, I can hardly contain my excitement!!!)

The ending was AMAZING. Like, yeah. But OH MY GOODNESS, the trilogy is complete!!!
(Excuse me while I go and cry off in a corner while stroking my bookshelf. Yeah … I’m normal.) I just – I just can’t comprehend this. :’)

My poor little Elm and Willow! Gosh darn-it, Nadine! Why?? WHY??? Seriously, though. I love these two! They’re just so sweet in their own little ways. But the poor little marshmallows (yes, I just said that)!!!! I can’t BELIVE what they’ve been through!!!

And then we have Parvin. Yes, our heroine. She’s DEFINITELY had a lot of growth – spiritual, mental – and it was just so cool to see! And she was pretty sarcastic in this, so, yeah, awesomeness.

You get more of Tawny in this … which is pretty awesome. I was definitely very interested in her!!!

Something I loved about this book was that I haven’t read the first two books since EARLY this year, and they DEFINITELY ended in cliff-hangers … but I had no trouble jumping right into this book (and getting my heart ripped out) – which was something that I was worried about.

And I really like Nadine’s writing (not sure if I’ve mentioned that before. … oh well)! It’s like a present first-person POV, which I like. But I also LOVE being in Parvin’s head so much, and she was SO ENTERTAINABLY SARCASTIC in this book. Yay.

Umm…. OTHER THAN MY HEART BEING RIPPED IN TWO??? Oh yeah, nothing really. (Though I’m sure there’s SOMEHTHING.)

This book is definitely a Christian book. Like the second book, I feel that it wasn’t a preachy as the first, but still really God-themed. There’s tons of people who had loads of spiritual growth – which was awesome.

Yes, there are deaths. HOW COULD YOU TELL??!! There’s torture (though you don’t actually experience it … just hear the tales). People blow up and get shot. People get crushed and die of … whatever. OH THE TRAGICNESS. Seriously, though.

Nothing beyond some kisses on the cheek ( ❤ ).

So, I’d recommend this book to all of you Christian teens out there! Like my sister (yes, I’m still working on ya, Sis), you may not like dystopian. But don’t let that stop you! I didn’t really like dystopina when I first started this series (though I’m starting to like it more). It’s not as oppressive as a lot of main stream ones right now. So keep that in mind.

And also, she’s working on a fantasy book at the moment (which you should totally read … not that I’m promoting it … okay, I totally am 😉 ), so if dystopian isn’t your thing…

And if you read this trilogy, be prepared for some grievously difficult deaths.

What more can you sacrifice than your life?

At least…that’s what the Council—and the world—thinks. But her sacrifice tore down part of the Wall long enough to stir up hope and rebellion in the people. Now she will rise again. Strong, free, and fearless.

Parvin and Solomon must uncover the mysterious clues that Jude left behind in order to destroy the projected Wall once and for all. Meanwhile, the Council schemes to new levels of technology in its attempts to keep the people contained. Can a one-handed Radical and a scarred ex-Enforcer really bring shalom to the world?

And, guys, a quick word about Nadine:

She is one of the most awesome authors that I know. If you comment on her blog, a decent bit of the comments she comments back. She loves to share (virtual) Oreos with anyone. On social media (I’m only on Goodreads, but everywhere else, too…) she’s super awesome. And her books are AMAZING.

So if you’d drop by her blog and give a congratulations or hello or something, please do so here. It’d mean the world to her if you did! Thanks so much, guys!!

GUYS, CRY WITH ME. Even if you haven’t read the books (which you TOOOOTALLY SHOULD!!)!!! Have any series that you’ve ADORED come to an end this year??? ANYONE ELSE OBSESSED WITH CAPS??? Tell me in the comments below (I almost said caps … oops)!!!

5 thoughts on “I finished a trilogy that I adore … come sob with me! (Review)”